UNIO S.A. Satu Mare is one of the most important companies of the machine building industry in Romania. During over 100 years of existence UNIO placed permanently itself on the top of the companies of the same profile through the technical level of the technical capacities and the qualification of the personnel.

Beginning with the year 2000, after the privatization of the company, a sustained technological program began through the implementation of updated technologies in the following sections: cutting, mechanical machining, welding, teething, heat treatment, surface protection and control. In this way, specialized lines have been created, in order to execute mostly products with west-European destination.

With over 850 employees UNIO is able to execute full sized complex projects involving machining and mechanical assembling works, hydraulic, pneumatic and electric equipment assembling, commissioning and service. More than 70% of the production is destined to the external market, especially to clients from Germany, Holland, France, Italy, England, Austria.

Established in 1911, Unio had a tremendous evolution. In 1927 Unio had been already producing railways carriages under Pullmann. Even if after the Second World War the production structure was changed, Unio became quickly national leader for the conveying systems on flow and hoisting equipment. In the same time Unio has created its own school where workers and engineers were trained and specialised.

The manufacturing technologies and production capacities have also been permanently developed. The destination of the production was mostly to the domestic market and new products were constantly developed in Unio's own engineering workshops Unio had important cooperations with world-wide prestigious companies contributing to the performance of their projects in Romania: Renault, Citroen , Ansaldo, Takraf, Nisho Iwai.

These new relations are based on Unio’s main advantages: the experience and professionalism of the employees, the flexibility in assimilation of know-how, the technical capacities, the products quality at ISO standards 9001: 2008, the client inquires achievement and the geographical position. 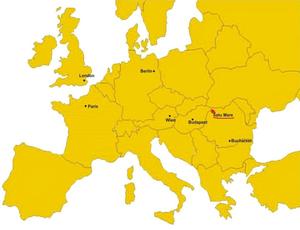 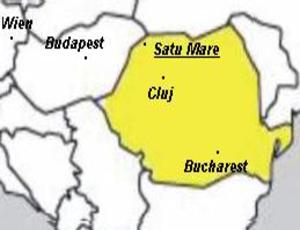 UNIO is located in Satu Mare, a 100 000 inhabitants town located in North-West of Romania, at 10 km from Hungarian border and 30 Km from Ukrainian border.

From Budapest. Distance Budapest-Satu Mare: 350km
Taking M3 up to Nyíregyháza, after taking road 41 and road 49 up to border point Csengersima-Petea.
From border 10 km to Satu Mare, pass the city in direction Cluj taking E81.
Before leaving Satu Mare you will find UNIO on the right.